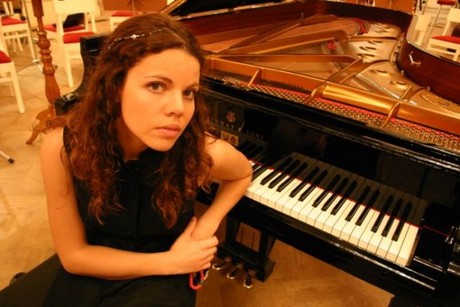 Anna Drubich was born in Moscow. From an early age, Anna was exposed to music and began piano lessons when she was only eight years old. Anna studied with Eliso Virssaladze at the Moscow Chopin Music College (1998-2002) and earned her Bachelor's and Master's degrees from the Munich School for the Performing Arts (2002-2008) under the tutelage of Professor Franz Massinger.


In addition to her piano endeavors, Anna has been writing music, focusing on film composition. Her first project, in cooperation with Andrei Golovin, was the score to the film O Liubvi [About Love] (Mosfilm, Russia, 2002), which went on to receive the Best Music Award at the Russian National Film Festival Kinotavr. After this success Anna decided to pursue her studies in Film Composition at the Munich School for the Performing Arts, under the guidance of N.J. Schneider and recently graduated in July.


Concurrent with her studies, Anna participated in several film projects, including the Lange Nacht der Musik for which she wrote several pieces. In 2009, Anna was awarded the Special Prize at the Soundtrack Cologne Competition for her composition for the animated feature The Factory. Most recently, Anna completed the score to three major feature films: Anna Karenina, 2ASSA2, and Odnoklassniki [Classmates] (Mosfilm, Russia). All three films had their premieres in 2010.


Anna’s work as a composer has led her to being nominated and shortlisted for the Russian Film Academy Award NIKA. She is also the winner of the prestigious Triumph Award in Russia. At the present time Anna is working on several major projects in Russia and Germany. Her diverse body of work can be heard on television, at the cinema, and in the theatre.  Projects include animated features, documentaries, and plays.


In addition to her music for the visual arts, Anna has been intensively involved in writing music for the concert hall. Several works, ranging from sonatas for solo instruments to chamber music to orchestra pieces, were debuted by famous musicians, many of them friends and colleagues. These pieces have always enjoyed a warm and enthusiastic reception from the audience and positive response from the critics. In the summer of 2010, Anna was chosen as one of five composers worldwide to spend a month in Aspen, Colorado, USA, studying and composing with major Hollywood composers Jeff Rona, David Newman, and Jack Smalley. Anna’s music has been performed and recorded by the American Academy of Conducting at Aspen Orchestra.