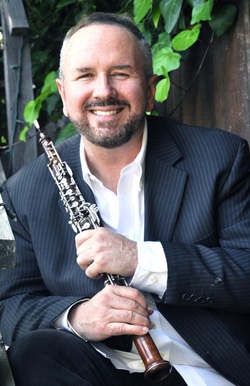 The incredibly wide and diverse audience that Tom Boyd reaches through his oboe performances on over 1400 motion picture film scores makes him one of the most heard oboe players alive today.   Mr. Boyd received his Bachelor's Degree from The Juilliard School and shortly thereafter won the Principal Oboe position with The Honolulu Symphony. After performing the standard orchestral repertoire of beloved greats such as Beethoven and Brahms (and surfing almost every day for ten years!), he decided to move to Los Angeles to see if he could break into the commercial studio scene. Three weeks later he found himself under the baton of John Williams playing principal oboe on Indiana Jones and the Temple of Doom.

Mr. Boyd was a professor of music at the University of Hawaii for ten years and has become the new Professor of Oboe at Azusa Pacific University. He teaches and coaches many young musicians throughout the United States.   Some of his larger films include Beauty and the Beast, The Lion King, Aladdin, King Kong, the Jurassic Park and Lethal Weapon series, Forrest Gump, and Cast Away. Most recently, he can be heard on The Bucket List, Alvin and the Chipmunks, Rush Hour 3 (composed by Lalo Schifrin), The Green Hornet, Green Lantern, Water for Elephants, and the upcoming film Big Miracle starring Drew Barrymore.

Mr. Boyd is also no stranger to television and has performed in many well-known ceremonies including the Grammys, the Oscars, and the Latin Grammys, and has been on The Tonight Show several times including an appearance in the orchestra with Neil Diamond. Mr. Boyd has also performed on many albums including those by singing legends Barbra Streisand and Natalie Cole. He is currently involved in a recording project of John Denver songs collaborating with  Plácido Domingo, arrangements by Lee Holdridge.