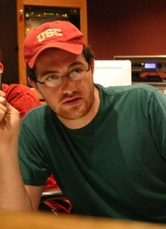 Austin Wintory began his obsession with film scoring back when he was ten years old, when he discovered Jerry Goldsmith’s scores to PATTON and A PATCH OF BLUE. Now, his obsession having mutated into a career of his own, his scores can be heard in more than 300 productions. In 2011 Austin scored his 30th feature film, “The Grief Tourist,” starring Michael Cudlitz (Band of Brothers, Southland) and Melanie Griffith. The score was completed while simultaneously “A Little Help,” starring The Office’s Jenna Fischer, was released nationwide to theaters, including a soundtrack release on Columbia Records featuring Austin’s original score and song “I’m Lucky.”Austin has also scored a handful of video games. The Playstation3 title “Journey,” set for release in spring 2012, occupied Austin for over 3 years and is widely considered one of the most anticipated video games of 2012. The score was recorded by an all-star ensemble of soloists including cellist Tina Guo, in addition to the Macedonia Radio Symphony Orchestra. Previously, Austin scored the highly acclaimed Playstation-3 game “Flow”, for which he received a British Academy Award nomination. Austin also avidly composers concert music, and is the current Composer in Residence for the Boulder Symphony in Colorado.