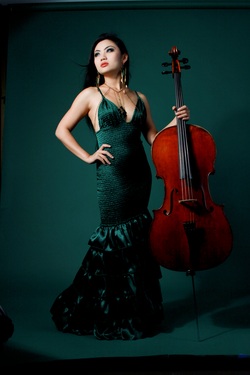 At  the age of 26, Tina Guo has already developed a fascinating international multi-faceted performing career as a solo classical cellist, rock/metal/fusion electric cellist, and acclaimed recording artist known for her distinctive sound and improvisatory style in major motion picture, television, and game scores.  She is also a composer, producer, photo artist/light painter, and published poet and writer.  Tina is currently the featured soloist the electric cello in Cirque Du Soleil's Michael Jackson "The Immortal" World Tour, and is also featured in the new commercial for the 2014 Mazda6 both on screen and as musician.  Tina has appeared as a classical soloist with the San Diego Symphony, the State of Mexico National Symphony, the Thessaloniki State Symphony in Greece, the Bari Symphony in Italy, the Petrobras Symphony and the Barra Mansa Symphony in Brazil, and the Vancouver Island Symphony in British Columbia.  She played at the American Country Music Awards with Carrie Underwood and soloed on the electric cello alongside Johnny Marr of the Smiths and Hans Zimmer at the Premiere of Inception in Hollywood.  Tina also appeared on Dancing with the Stars performing with Carlos Santana and India Arie and was eatured on electric cello solos on the new soundtrack for Blizzard's Diablo III and Call of Duty: Black Ops II.  Tina was the featured classical cello soloist on the score for "Journey" for PlayStation3, currently nominated for Best Soundtrack at the 2013 Grammy Awards.

Tina performed at the Grammy's with the Foo Fighters, at the MTV Movie Awards, American Idol,  at Comic Con in San Diego featured on the electric cello in the Battlestar Galactica Orchestra, and with Brazilian guitarist Victor Biglione in a Jimi Hendrix Tribute Concert at the Copacabana Palace in Rio de Janiero.  Tinawas featured on New Jack Swing Legend Al. B Sure's new single, "I Love It" and appeared with him in Billboard Magazine.  She also played with Far East Movement on the Lopez Show and completed a month-long classical recital tour raising money for a Buddhist Temple/Organization throughout Indonesia.  Tina is the featured cello and electric cello soloist for Hans Zimmer's score for Sherlock Holmes and John Debney's Iron Man 2 score.  She is also featured on acoustic and electric cello solos for Bill Brown's score for CSI:NY and recently recorded solo cellos for Red Riding Hood and Abduction.

She performed with violinist Midori Goto in Dvorak's American String Quartet at Walt Disney Concert Hall in Los Angeles, and completed three national tours of Mexico performing the Shostakovich, Dvorak, and Saint-Saens Cello Concertos.  Tina also performed at the wrap party for the Sundance Film Festival, was featured in a wildlife benefit concert at the Playboy Mansion, and has shared the stage with Stevie Wonder, Peter Gabriel, Josh Groban, John Legend, LeAnn Rhimes, Chris Isaak, Il Divo, and Michael McDonald.  Tina recently performed in a sold-out concert in England for Dreamworks with Hans Zimmer and John Powell for a live concert of music from Kung-Fu Panda 2, Pirates of the Caribbean, Shrek, and many other blockbuster movies featuring her as soloist on electric cello and erhu.  Tina also played on the soundtrack for Hancock, Inception, Battle: Los Angeles, Clash of the Titans, Predators, The Fast and the Furious, and on the TV shows Family Guy, American Dad, King of the Hill, among many others.  Her solos on the electric cello are featured on entire season score of Iron Chef and her arrangement and performance of "The Flight of the Bumble-Bee" was featured in the end credits for Ben Stiller's The Heartbreak Kid.